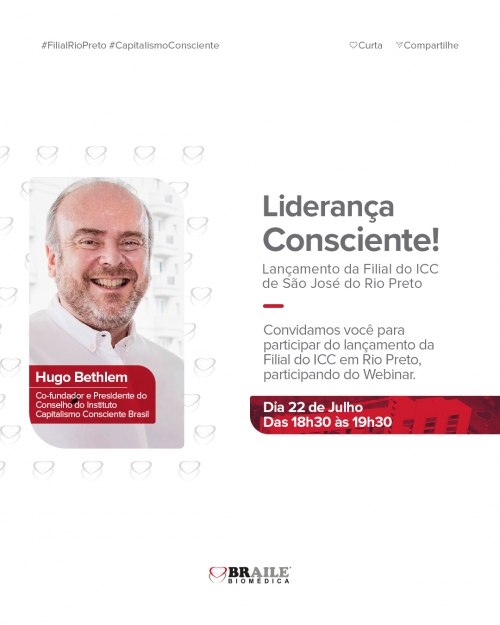 Braile Biomédica, a supporter of Conscientious Capitalism and having the company's president, Patricia Braile, as the Institute's Adviser Emeritus at the national level, supports the creation of the regional branch in Rio Preto.

The objective of the branches is to talk more closely with groups of entrepreneurs and business centers aligned (or wishing to align themselves) with Conscious Capitalism in each region of the country, and always rely on the support of the national headquarters to strengthen the activities developed.

The initiative of this Rio Preto branch was led by Daniel Rodrigues, founder and director of CCLI Linguistic Consulting, with the participation of Luis Fernando Lucas, author of the book "A Era da Integridade", Dario Neto, general director of Conscious Capitalism, Patrícia Braile, President of Braile and Councilor Emeritus of the Institute and Diogo Tadei, Certified Ambassador at Conscious Capitalism Brazil.

“Conscious Leadership”, given by Hugo Bethlem, Co-founder and Chairman of the Board of Instituto Capitalismo Consciente Brasil. The event was online and free and reflected on how leaders to be aware must rethink and improve their practice. This event sought to bring the public in the region of the Regional Branch and bring a lot of important knowledge.